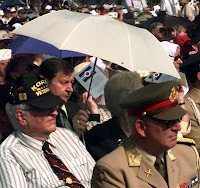 Korean War veteran Milton Seidel, 68, protects himself from the sun during the 50th Anniversary Commemoration of the start of the Korean War June 25. Seidel, who served with the U.S. 8th Army, joined about 7,000 other veterans for the ceremonies. (Photo by Rudi Williams)


Thanks, Uncle Milt. We miss you.