WISCONSIN Public Schools Can Interrogate Your Child - You don't GET to know....

It's true, and it's disturbing.

BUT IT DOESN'T HAVE TO BE THAT WAY.  SO GET ON IT. 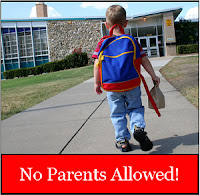 According to WI state law, your local public school can yank your kid aside and interrogate them for something they "suspect" they were involved in, and they don't have to ask your permission to do so, thankyouverymuch.

Since when does sending our children to a public school mean we hand over our parental rights?  Last time I checked, it doesn't.

Read this story over at Irate, Tireless Majority, then urge...no....very strongly request that your Senator sign on as a co-sponsor to this bill that will protect your child, preserve your parental rights/authority, and stop the abuse of "in loco parentis" in a government institution.  And call Senator Joe Leibham's office while you're at it and THANK HIM for authoring this common-sense bill that defends both parents and children.  His number is (608)-266-2056; email is Sen.Leibham@legis.wisconsin.gov .

For more insight on this issue, read the 2007 post from American Federalist HERE. (Don't forget to read the comments.)

You can locate your Senator HERE.  Make the call.  Make this happen.
Posted by West Bend Citizen Advocate at 7:52 PM No comments: