ALA/OIF makes fools of themselves 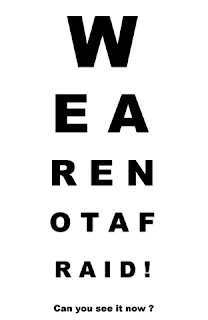 As always, a little dessert to go with your dinner. Here is a goodie from Dan Kleinman, SafeLibraries:

The following is my response to American Library Association [ALA] President Jim Rettig and the ALA's Office for Intellectual Freedom Acting Director Deborah Caldwell-Stone regarding the matter in West Bend, WI.

It is so easy to prove these people false, and no one should ever be intimidated by them or the ALA. The ALA only further marginalizes itself:

Ms. Caldwell Stone responded, "For the record, Mr. Kleinman does not ... accurately portray my views or the views of ALA's Office for Intellectual Freedom." However, in the past, Ms. Caldwell-Stone said, "There are times when a book might be moved, for example a young adult novel makes it into a fourth or fifth classroom and that's more appropriate for the high school library, and a committee can just say this was an inappropriate book to buy for this age group but it was an appropriate book to buy for this age category and it works for this high school library." Listen to the Deborah Caldwell-Stone say this in her own voice by clicking on the link located at "Deborah Caldwell-Stone Discusses Banned Books", by admin, American Library Association, 11 July 2008.
Now my reading of that tells me that there are times when a book might be moved for reasons of age appropriateness. Yes, the context was a public school library, but the same principle applies, and the speaker was Deborah Caldwell-Stone herself.
So when I said, "Further, the books will just be moved in the library. Even Deborah Caldwell-Stone has said that is appropriate in the appropriate circumstance," I have "Deborah Caldwell-Stone Discusses Banned Books" as my reliable source for that statement.
I try to provide accurate and truthful information, and I usually back it up with source material. Only this time I provided the source after I made the statement; how ironic the source I provided is the very person claiming I do not "accurately portray [her] views or the views of ALA's Office for Intellectual Freedom." Apparently, I do, at least in this instance.
....... US v. ALA, a big loss for the ALA and the ACLU, saw the Court say, "The interest in protecting young library users from material inappropriate for minors is legitimate, and even compelling, as all Members of the Court appear to agree." Did Ms. Caldwell-Stone tell you about that? Does the US Supreme Court make book banning and censorship the law of the land? No and no. See also "LISNews Disses Judith Krug Unwittingly" for how the ALA, indeed the very Office for Intellectual Freedom Caldwell-Stone leads, misleads the public on the issue of censorship just as she is doing here on this Queery blog post.

And the ALA President himself has gotten directly involved. See the letter I have included below.
.....
Material can be inappropriate for children and still not be pornography. The issue is inappropriate material for children, not pornography. Efforts to cast the issue as pornography are merely efforts to cleverly avoid the real issue.
Notice he also talks about, "we must preserve the intellectual freedom rights of the entire community," but his direct involvement in this matter is precisely the opposite, namely, to prevent the rights of the entire community and enforce the ALA's policies.
It's a public library, not an ALA library. It's West Bend's library, not Chicago's library. Do not be fooled by desperate people using false pornography and censorship claims or out-of-date GLBT claims. Notice how none of these people and organizations are discussing the actual issues, namely, the legal means for protecting children that is being sought in West Bend and successfully applied in other communities. Why is that?