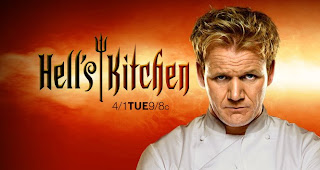 I must admit, I am fascinated with cooking shows. I enjoy just about any one of them, from the Iron Chef to Rachel Ray. But I have my limits. I watched "Hells Kitchen" when it first debuted. It was not enjoyable. If anything, it was vulgar and downright stressful. The subject material is innocent, but the language content is beyond measure for inappropriate profanity, not to mention the need for anger management for the Master Chef. Fear and intimidation is not fun. Oh sure, they "bleep" a lot on the show, but let's face it, we all know what is being said. That is enough for me. This show is banned from my house.

"On British television, celebrity chef Gordon Ramsay uttered 243 profanities—including 187 f-words—in a two-hour (Jan. 30) installment of Gordon's Great British Nightmare. That's a record for the U.K. Ramsey, the star of several cooking shows worldwide, earned a sharp retort from British Minister of Parliament Don Foster, who called Ramsay's language "beyond a joke." Foster added, "When you hear about this much swearing in a single program, you're tempted to utter an expletive yourself. We have got to tone it down because bad language on TV is seeping into society." [news.com.au 2/2/09 stats, c&e] "

Posted by West Bend Citizen Advocate at 10:32 AM