Why believe in God? DC Buses will tote new ads for Christmas... 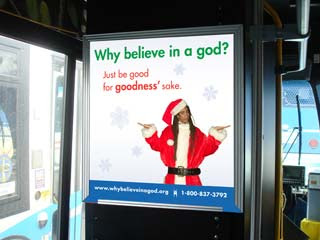 WASHINGTON, D.C. — You better watch out. There is a new combatant in the Christmas wars.
Ads proclaiming, "Why believe in a god? Just be good for goodness' sake," will appear on Washington, D.C., buses starting next week and running through December. The American Humanist Association unveiled the provocative $40,000 holiday ad campaign Tuesday.
In lifting lyrics from "Santa Claus is Coming to Town," the Washington-based group is wading into what has become a perennial debate over commercialism, religion in the public square and the meaning of Christmas.
"We are trying to reach our audience, and sometimes in order to reach an audience, everybody has to hear you," said Fred Edwords, spokesman for the humanist group. "Our reason for doing it during the holidays is there are an awful lot of agnostics, atheists and other types of non-theists who feel a little alone during the holidays because of its association with traditional religion."

MORE HERE:
http://www.foxnews.com/story/0,2933,450445,00.html
Ok, I just had to stop for a minute to wipe away the tears from laughter... This is just too FUNNY! Look at the ridiculous statement made by Edwords, the spokesperson for the AHA... Maybe the agnostics, atheists and other types of nontheists feel alone because they CHOOSE to be alone!
PUUUUUUUHHHHHLEASE.
Um, excuse me? The word Christmas would be nonexistent if there had been no Christ, no God, no believers. If one chooses not to believe, then by all means, relax near the hearth with Scrooge on Christmas Day. And by the way...Christmas has become so secularized that one does not have to have any sort of "belief system" in order to celebrate Christmas. So this whole campaign is just a bunch of bah-humbug! STILL LAUGHING!
Posted by West Bend Citizen Advocate at 2:02 PM