WEST BEND MEMORIAL DAY PARADE - AN HONOR TO OUR VETERANS

Posted by West Bend Citizen Advocate at 12:52 PM No comments: 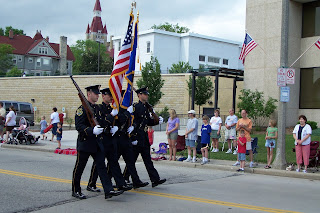 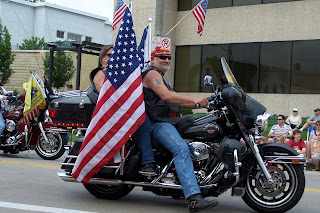 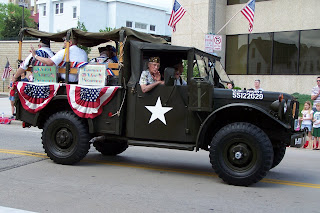 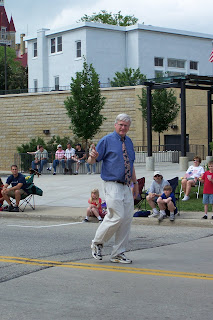 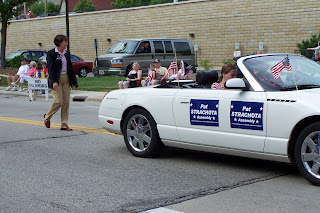 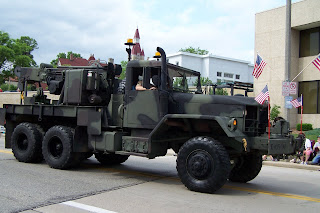 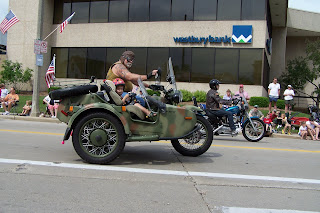 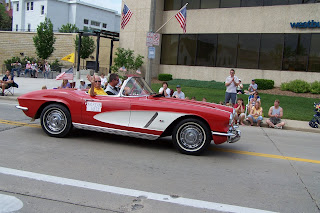 Posted by West Bend Citizen Advocate at 12:43 PM No comments:

HEADQUARTERS GRAND ARMY OF THE REPUBLIC

Posted by West Bend Citizen Advocate at 12:23 PM No comments: 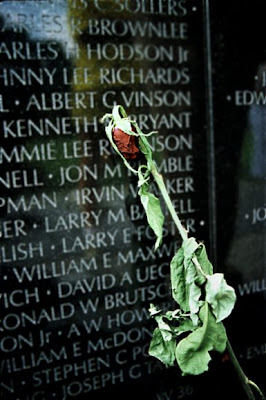 Posted by West Bend Citizen Advocate at 6:45 AM No comments:


Although somber and respectful, this Memorial Day will be different because, one week following the death of five troops in Kabul, Barack Obama has decided to forgo the Arlington Cemetery tradition of commemorating dead soldiers and instead intends to fly to Chicago for an extended weekend.

So Obama dumps the time-honored, somber, presidential tradition of representing the American people in honoring fallen soldiers at Arlington?  The Tomb of the Unknown Soldier will be decorated in a delegated fashion this year?  Maybe Obama is taking the weekend to catch up with his Alinsky buddies.  That's it.  Priorities, ya know.
As an American and a United States Army veteran, I am personally offended with this atrocious behavior.
Posted by West Bend Citizen Advocate at 6:29 AM No comments:

West Bend Memorial Day Parade - May 31, 2010The West Bend Memorial Day Parade will start at 9:00 9:30 AM, lineup at 8:30 AM at S. Main St. & Oak St.  Memorial Ceremony at Veterans Plaza at 11:00 AM.  The Ceremony will include dedication of new benches & signage.  They will also say happy retirement to Terry Vrana who has worked tirelessly to keep the parade & Memorial Ceremony a spatial time - "THANKS TERRY!"
Posted by West Bend Citizen Advocate at 11:08 AM No comments:

In order to provide optimal care (of course).  As opposed to what?  Wonder if business is picking up at the Albrecht Free Clinic.....

Posted by West Bend Citizen Advocate at 10:52 AM No comments:

Posted by West Bend Citizen Advocate at 10:09 AM No comments:

This is the Tussing Elementary 3rd grade class singing a sincere thank you to our brave and strong soldiers, men and women, past and current, for protecting us in times of war and peace.
Posted by West Bend Citizen Advocate at 2:57 PM No comments:

My husband and I celebrated our 24th wedding anniversary this past weekend with a short overnighter to downtown Chicago.  We dumped some cash into the Illinois economy and took advantage of the sights and smells of State/Michigan Streets and beyond.  We were invited to a private party at the House of Blues on Dearborn Street that included a show by the Doobie Brothers.  If you have never been to the House of Blues, it's a "must do" on your next visit to Chicago.  Medium-casual and moderately priced, it's a pretty affordable lunch or dinner with cocktail specials on a daily basis.  There is a Sunday "Gospel Brunch" that is rumored to be pretty spectacular, as well. The "theater" area is separate from the restaurant/bar area.  It's laid out in a unique and acoustically complimentary manner (said to imitate an opera house) with four(?) levels of seating that are in half-circles as balconies facing the stage down below.  There is also floor seating in front of the stage, which is what we were treated to, so the Doobies were literally right in front of us.  :-)   I have to admit, though we have passed into the "middle ages," the Doobie Brothers were sounding mighty fine that night!

Posted by West Bend Citizen Advocate at 10:46 AM No comments:


“While the sale of unpasteurized milk was technically illegal in the State of Wisconsin, the Department of Agriculture did not enforce this ban until last year.  For the Dairy State to take the lead in banning sales of raw milk while California allows the sale at retail stores is infuriating,” said Grothman.


“My heart goes out to the hundreds of people who have been advised by doctors, chiropractors, and nutritionists to drink raw milk for their problems who now will have to suffer,” said Grothman.  “Most farmers drink raw milk themselves and many give raw milk to their employees and relatives.  They know it’s healthier. Whether it’s arthritis, allergies, stomach disorders, or obesity, raw milk’s the way to go. Hopefully, we can find a way to make this legal again soon.”


The fact that agribusiness and the State Medical Society weighed in shows that enforced conformity and a lack of freedom is becoming accepted in America.


It’s important that all consumers of raw milk -- as well as freedom lovers in general -- weigh in strongly with elected officials who will be sworn in next January.
Posted by West Bend Citizen Advocate at 4:10 PM 1 comment:


MADISON – Governor Jim Doyle today vetoed Senate Bill 434 in its entirety, in order to protect the health of Wisconsin citizens and the state’s dairy industry. Governor Doyle issued the following statement regarding his action on the raw milk bill:

“I recognize that there are strong feelings on both sides of this matter, but on balance, I must side with the interests of public health and the safety of the dairy industry.

“I am listening to the unanimous voice of public health professionals including leading doctors at the Marshfield Clinic and Gundersen Lutheran Health System who have found the sale of raw milk to have potentially harmful health effects. "

Posted by West Bend Citizen Advocate at 11:18 AM No comments:

On this day in history, 2005, the last episode of Star Trek: Enterprise was broadcast.
Posted by West Bend Citizen Advocate at 1:50 PM No comments:

Posted by West Bend Citizen Advocate at 12:26 PM No comments:

Gypsy Moth Spraying - Coming Soon to an Area Near YOU: West Bend Targeted for May 12-15

Gypsy moth spraying by the Wisconsin Department of Natural Resources (DNR) and the Wisconsin Department of Agriculture (DATCP) is expected to start this week in some counties. The projected dates to spray in the identified West Bend zone are May 12 - 15, 2010. Because spraying depends on appropriate weather conditions, this plan is subject to change.

Planes fly low and loud when spraying and may be single-engine yellow planes or red-and-gray twin-engine planes with 2 tail wings at the back.

To view the specific sites that will be sprayed in each county, visit http://gypsymoth.wi.gov. At the right-hand side of the page, click on the blue or yellow county you would like information about on the Wisconsin map. On the page that comes up next, you can open detailed PDF documents that show maps of the spray areas.

All sites will be treated with the active ingredient Btk. Btk is the common abbreviation for a naturally-occurring soil bacteria that, when eaten by gypsy moth caterpillars, causes them die within a few days. Btk is generally not harmful to people, pets or other wild species.  The formulation to be used this spring has been listed by the Organic Materials Review Institute as acceptable for use in organic food production. However, if you are concerned, you may wish to avoid areas to be sprayed on the day that spraying occurs or simply stay inside with the windows closed during and for 1/2 hour after the spray treatment has been completed.